As a thank you, I'm working on the game from the ground up. Addressing the issue of disconnecting players. Please follow my tweet thread for updates.

Disc Us is an online multiplayer game where you need to work together to survive.

If you are assigned as Traitor Disc you must do everything that you can to stop other players from completing their tasks.

Make it more difficult for them. But avoid getting caught or giving them suspicion.

If you are assigned as Scientists, you must be quick and bring the objects to their proper places.

If you are suspicious of any player or need a timeout, just press the red button in the Center Hub.

ABOUT Disc Us is our #discroomgamejam entry. Keybol worked on the programming while Mwaayk did the art and animation. We decided to create a multiplayer game like Among Us and added Disc Room’s theme and our own spin on this social deduction game.

GAME MECHANICS You are a team of scientists on a mission to fill the chamber with oxygen. You have to find and pick up oxygen tanks and place them in the oxygen hub. You also need to put orbs on pedestals and throw the trash out. The rooms are filled with dangerous discs, avoid them at all cost. Complete all the tasks before oxygens run out and you win the game.

BUT THERE’S A DISC AMONG YOU Up to 3 players can be randomly assigned as traitor discs. A traitor disc can pretend to work like a scientist. They can pick up quest items and put them in a tight spot or hide them. They can move the oxygen tanks out of the hub. They can also transform into a disc and kill you. They will do everything to slow you down. They can use the trash passage to transport to other parts of the room. Find out who the traitor discs are and put anybody you suspect in jail.

In Disc Us, it’s not over until the game is over. If you get killed you respawn in the center hub. If you get voted out you can still get back in the game by convincing other players to use the key to open your jail.

Can you upload a Downloadable Version? <3

I think this game is good tbh

This is a shameless among us remake, do not support fraud games like this. Go support Innersloth instead.

If its bad why u post on this then???

You must be really fun at parties, chum!

if your username id d!3, i am devX

There's idiots That Online Date in This Game

Wow, I finally found a game that is totally 100% original, made from scratch and definitely didn’t take any inspiration at all from Among Us!

it keeps saying network error when my network is perfectly fine

yeah when i press join. And im right next to my internet signal provider. Idk whats going on

shoutout to my dude mike (fake name he gave us) for randomly showing me he's a disc lol?

I've stopped playing among us, but I miss the happiness it brought me, so I can't wait to play this again lol

can't believe i forgot about this, what am i, stupid?

Among us: But with D I S C S, and Crewmates/Imposters with A R M S

i love this game

Why does the background song when playing sounds like a small portion on loop of 69 by Jake Chudnow?

yeah i agree and add censor chat everyone keeps swearing

among us https://amongus-online.net/ Try the game its fun

this is the best game

this is the best game i played

is this a fangame or a shameless knock off

Okay so basically the only differences r is that u  can jail any suspects and u can also physically empty the garbage, fill o2, and do orbs. There can be up 2 three imposters and u can set the game up however u want and more. 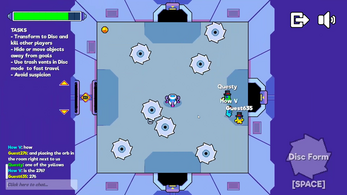 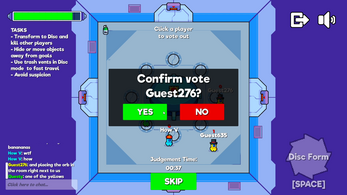 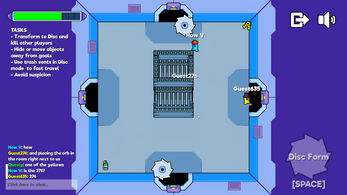